After our whirlwind tour of Europe we decided to head to Johannesburg, South Africa.  We had always been curious about South Africa and wanted to experience it for ourselves.

We arrived at the airport and decided to stop in one of the restaurants to have some breakfast.  The Johannesburg airport was pretty nice (much nicer than some of the smaller airports we had been to).  Their airport had several shops and restaurants inside like you would expect from any major US airport.  We decided to eat breakfast at a spot called “Wimpy” inside the airport.  Here’s a look at our first South African breakfast.  Pretty funny that fries were included with the meal.  The meals cost about $5 USD which was great for the budget. 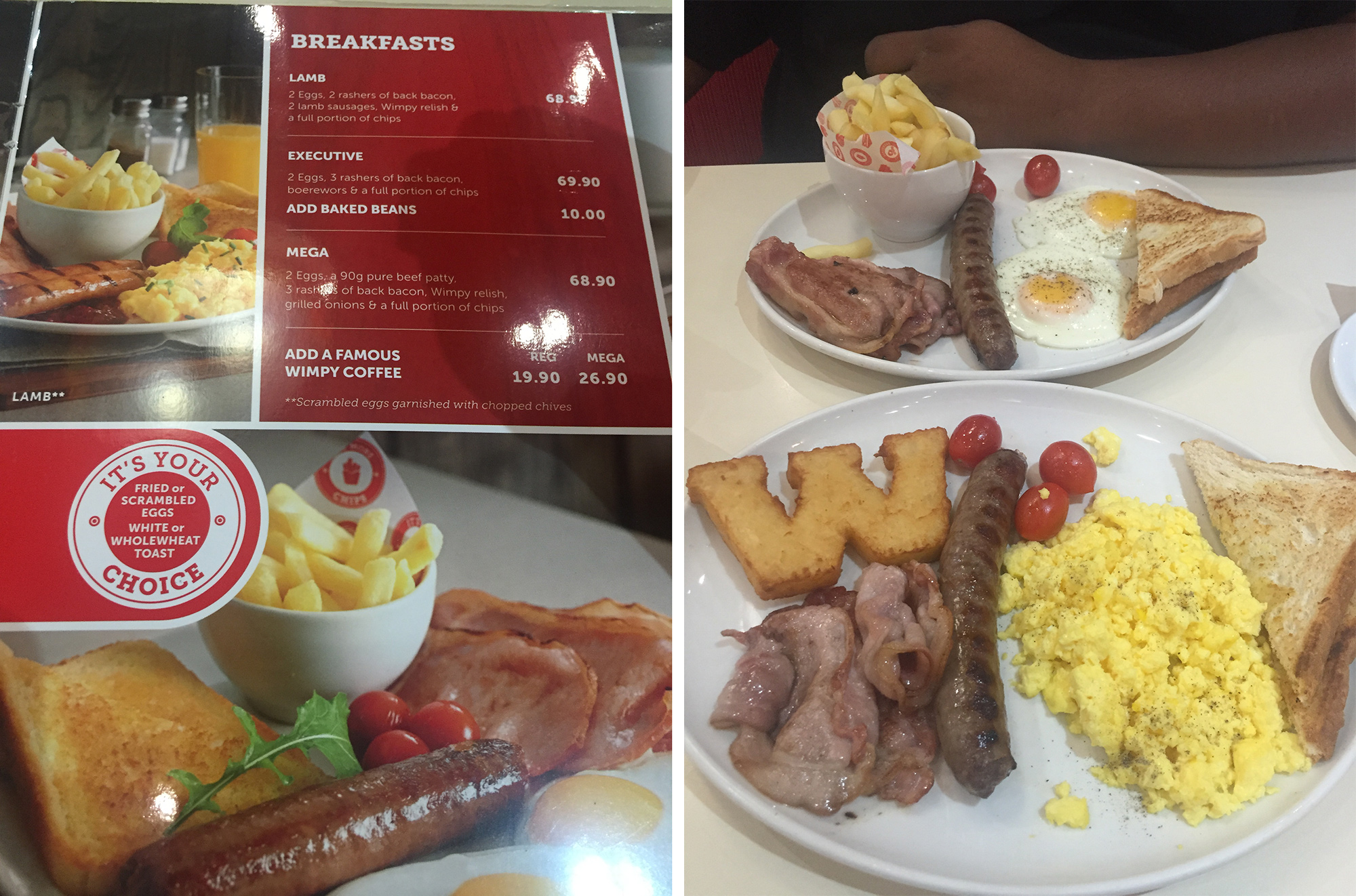 We opted to stay in an AirBnB spot in Johannesburg because the price/accommodations couldn’t be beat.  We found an amazing cottage home which was part of our host’s home (she had 3 small cottage houses on her property).  This was no doubt the best accommodation we had since going on our tour.  The cottage home was absolutely perfect and equipped with everything we might need (including washer, full kitchen and a pool!).  I can’t believe we were able to get all of this for $65/USD/night!  Debbie was the perfect host during our stay.  The cottage home was private so that we had full privacy when needed, but she was available whenever we had a question.  I almost don’t want to share this spot because it was so good but she was so kind to us during our stay so she deserves all of the recognition.  Check out Debbie’s place here if you are ever looking for a great spot to stay in Johannesburg.

The other bonus to our home was location – it was in a great quiet neighborhood and down the street from a newly developed shopping center which could rival any shopping area in the US.  Great restaurants, and cool shops made this a very convenient location.  We found a favorite restaurant there called JB’s Corner which served a little bit of everything – kinda reminds me of California Dreaming here in the US.

The next day we decided to explore Johannesburg a bit.  We knew that we wanted Soweto to be one of our first spots to see.  We had always heard so much about Soweto so we wanted to see and experience it for ourselves.  When we arrived, let’s just say that it was shocking to see the big difference between the area where we were living and Soweto.  It was almost like stepping into two different worlds.. 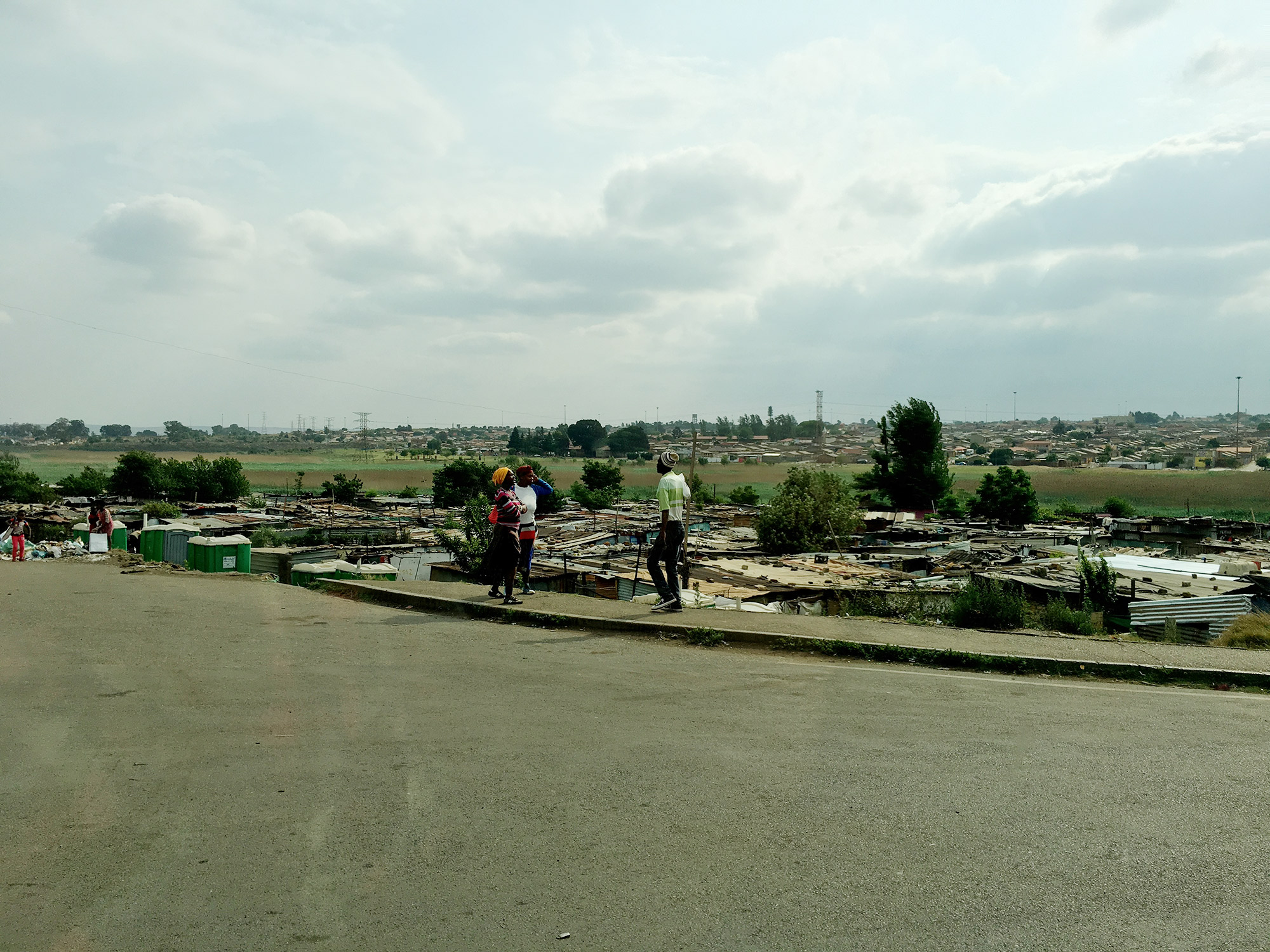 We stopped by a few local vendors lined along the streets in Soweto and were able to snatch up a few accessories for our upcoming shoot.  Oh and we were pretty excited to have this Mandela money in our hands!  LOL.  Reg joked about wanting to make it rain in Mandelas..hahaha! Overall the people were really kind to us and welcomed us even though we stood out like a sore thumb.  We would often hear calls of “American!” when they wanted to get our attention which was a little weird for us, lol..

Afterwards we drove around a bit and made a stop at the Nelson Mandela House which is now a tourist destination in Johannesburg.  It was a little too late to go inside but we were able to take a peek from the outside.  One thing we learned quickly about South Africa is that they have unofficial “parking attendants” everywhere who will offer to watch your car in exchange for a few bucks.  Sometimes there’s no getting around it since they are sometimes stationed in parking lots.  We also met a few guys who decided to serenade us with a song called “Welcome to Soweto” hoping for a little change in exchange.  Here’s Reg looking extra awkward not knowing what he had gotten himself into, LOL.. 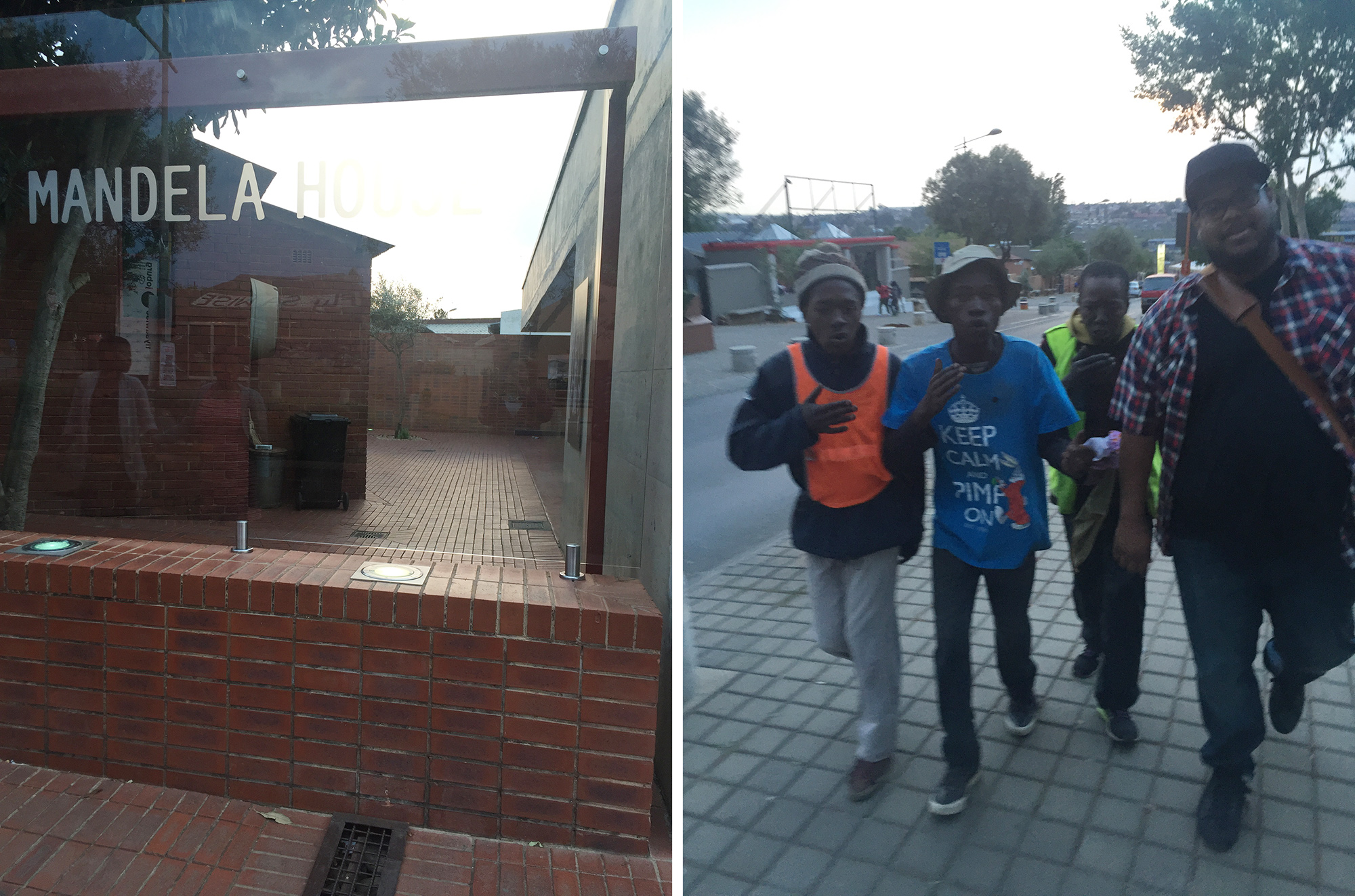 When we ran across this little caravan my heart skipped a beat.  I knew this would be perfect for the shoot that we had in mind but unfortunately it was gone on the day that we decided to do our shoot. 🙁

The other thing we learned quickly is that street vendors and performers are everywhere selling anything from batteries to toys to household items. We got a kick out of watching these guys..

The next day we met up with Bothale who is the owner of Hairtural natural hair salon in Johannesburg. Bothale’s hair salon is unique in that they specialize in heat free styling for natural hair.  She had already been so helpful for us as soon as we announced our trip to South Africa so we were excited to meet with her in person. 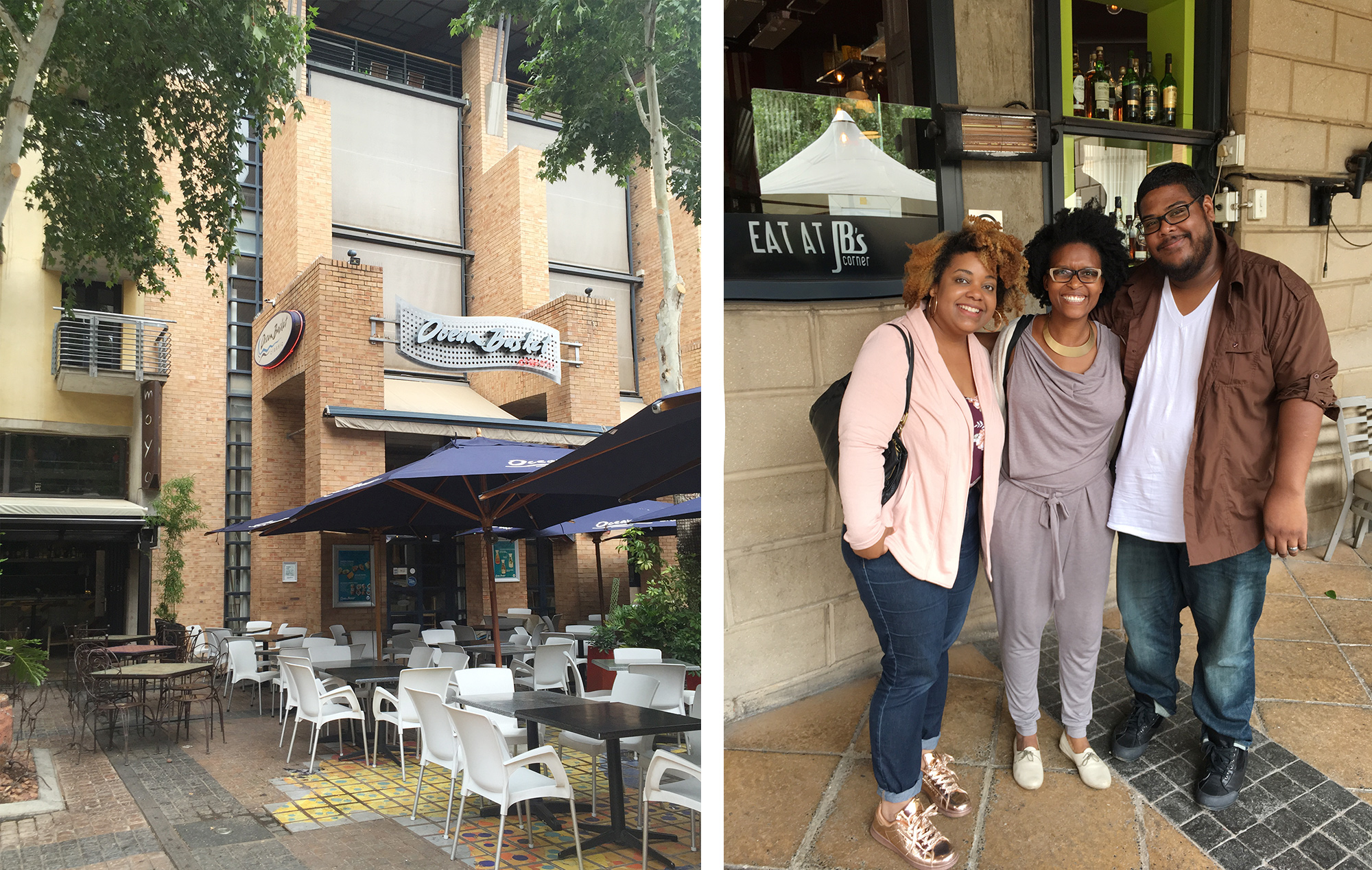 Later, we decided to do a little shopping and met with Palesa, owner of JUA accessories in Joburg.  Palesa is a part time business owner who makes gorgeous jewelry and accessories.  We were thankful to be able to use some of her gorgeous pieces for our shoot. Each piece she pulled out was more beautiful than the next. While writing this blog post I just peeped some new pieces I am wanting already, lol!

Next we headed to the Sandton Mall – a pretty snazzy mall in Joburg so that we could hit up their H&M store for a few extra items we needed.  While walking around the store, we were stopped by the two ladies below who asked if we were CreativeSoul – err what?  To our surprise, they said that they follow us on social media and loved all of our work.  To say I was floored would be an understatement to see how far our work had traveled.  Still doesn’t seem real.. 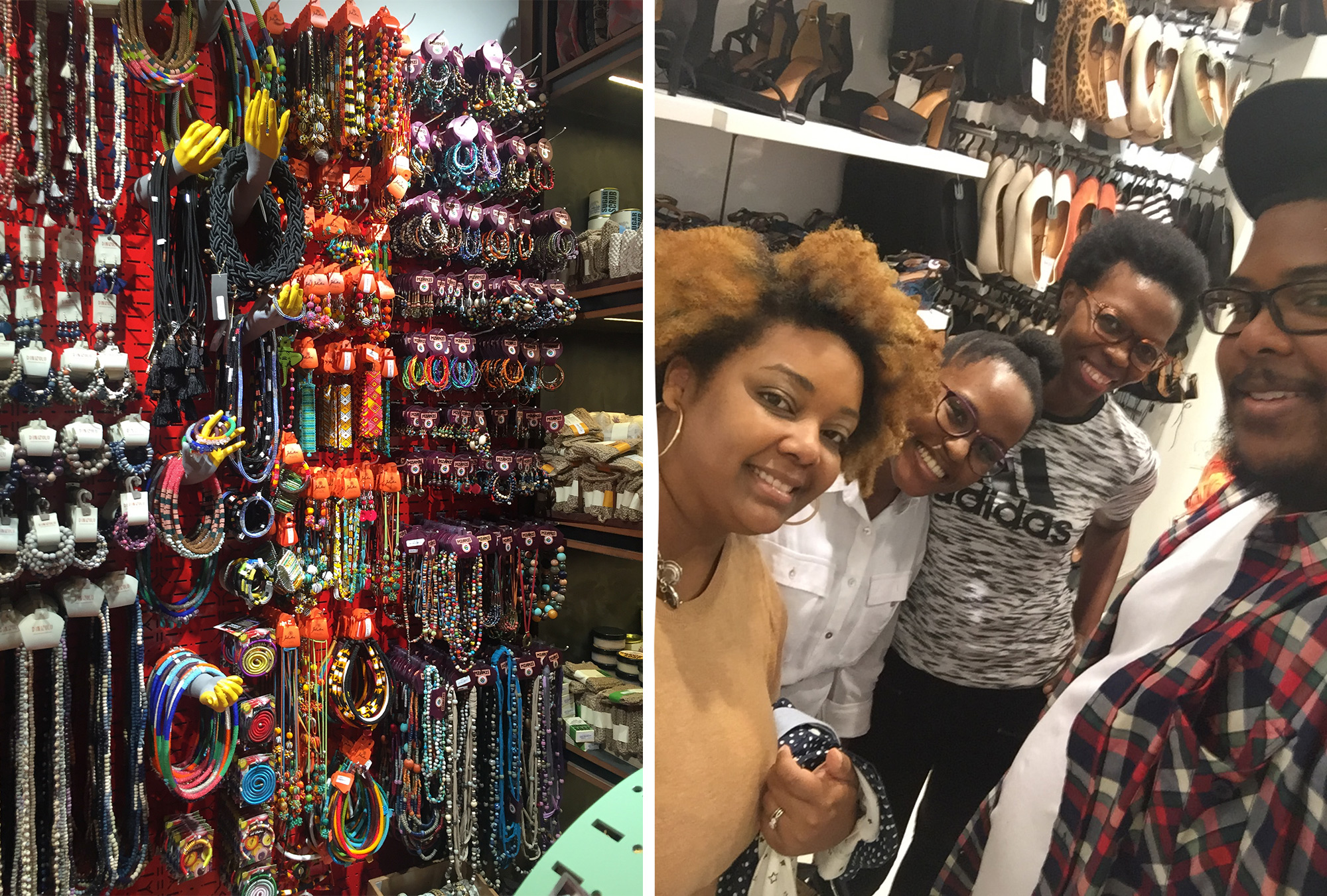 Later during our trip, we decided to explore a bit more and visit some of the more modern areas in Joburg.  One of the recommendations was a little area called Maboneng which is where the young hipsters hang out.  We were in love with this little area filled with culture, nice restaurants, artsy buildings and shops all around. 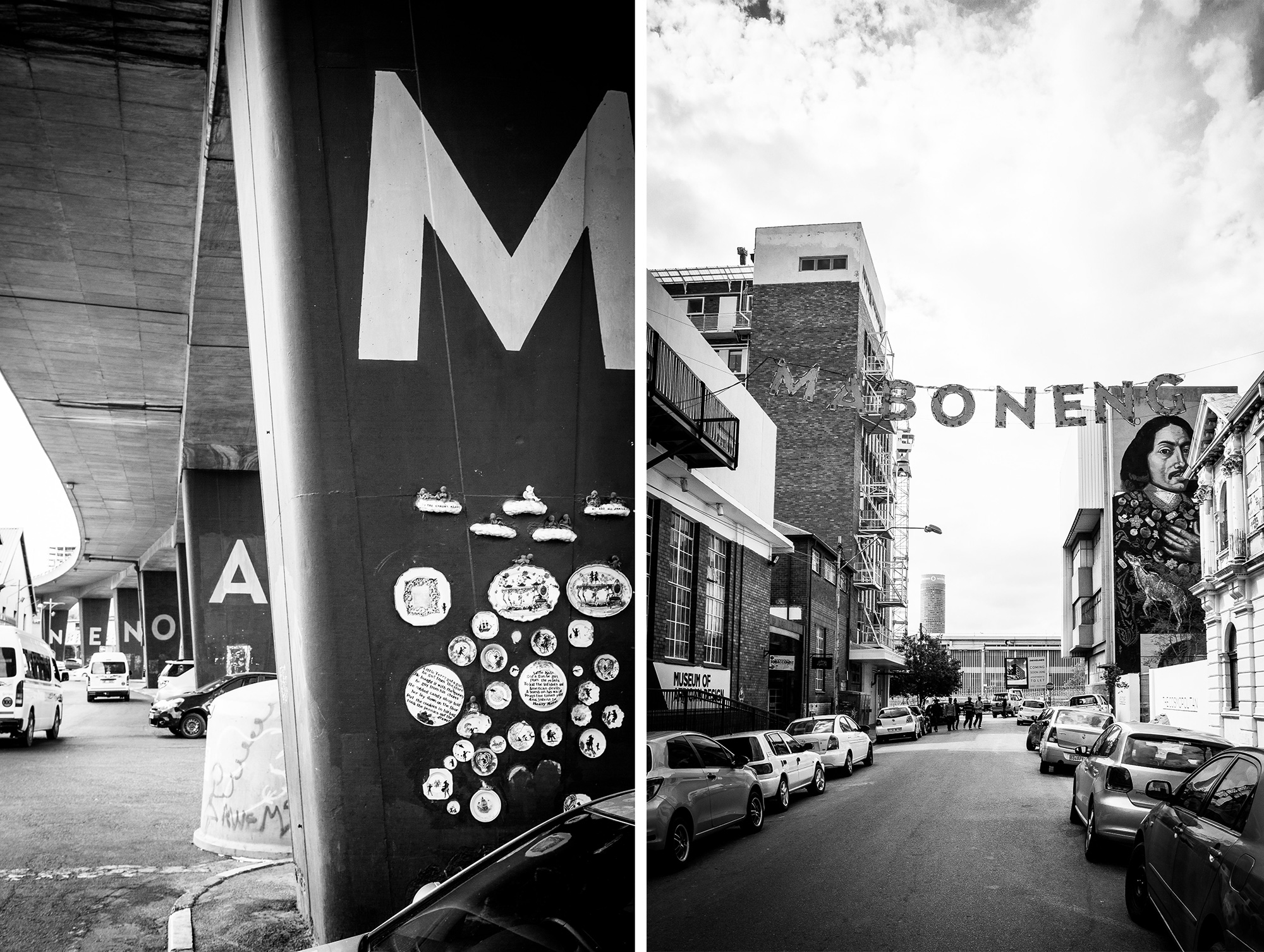 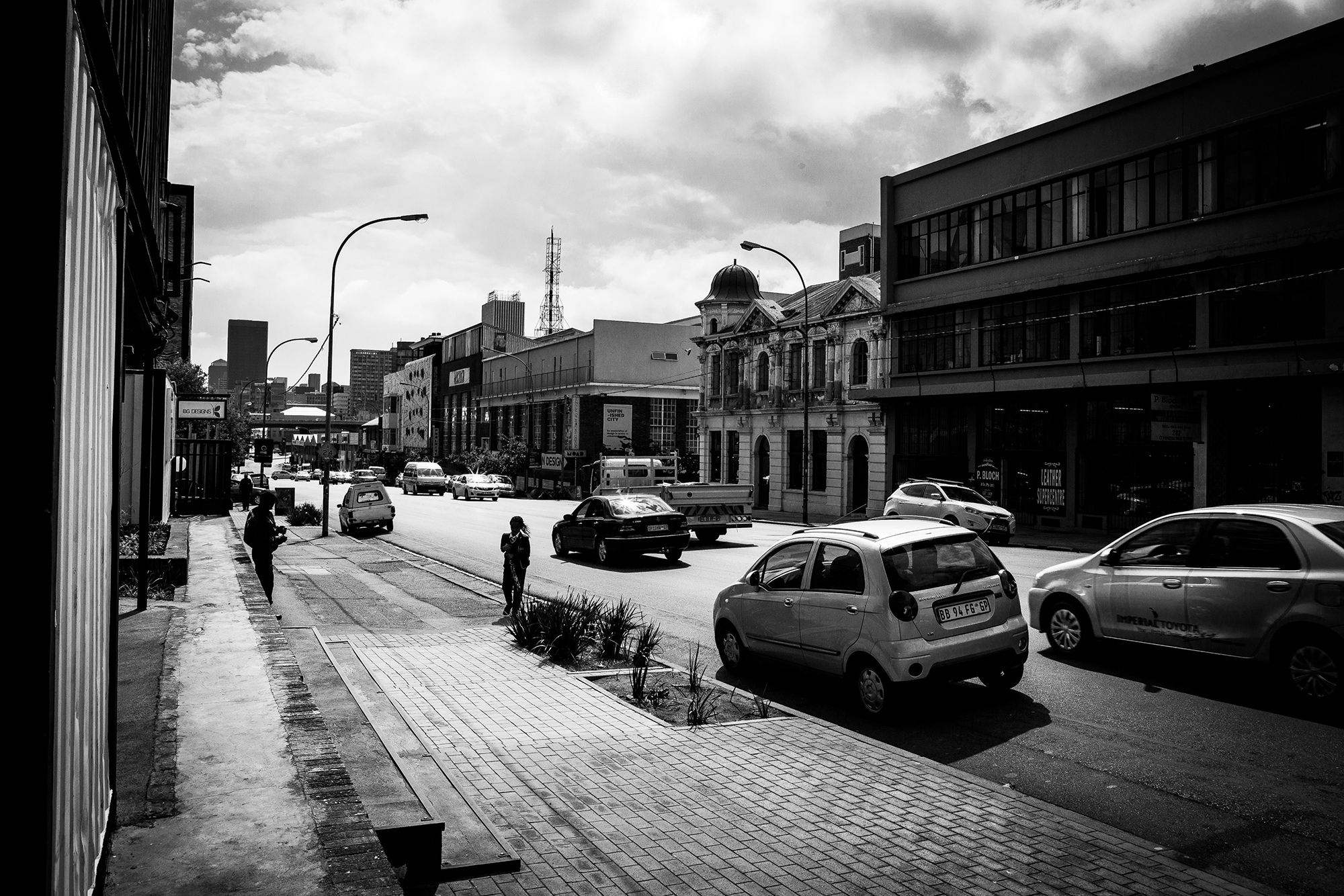 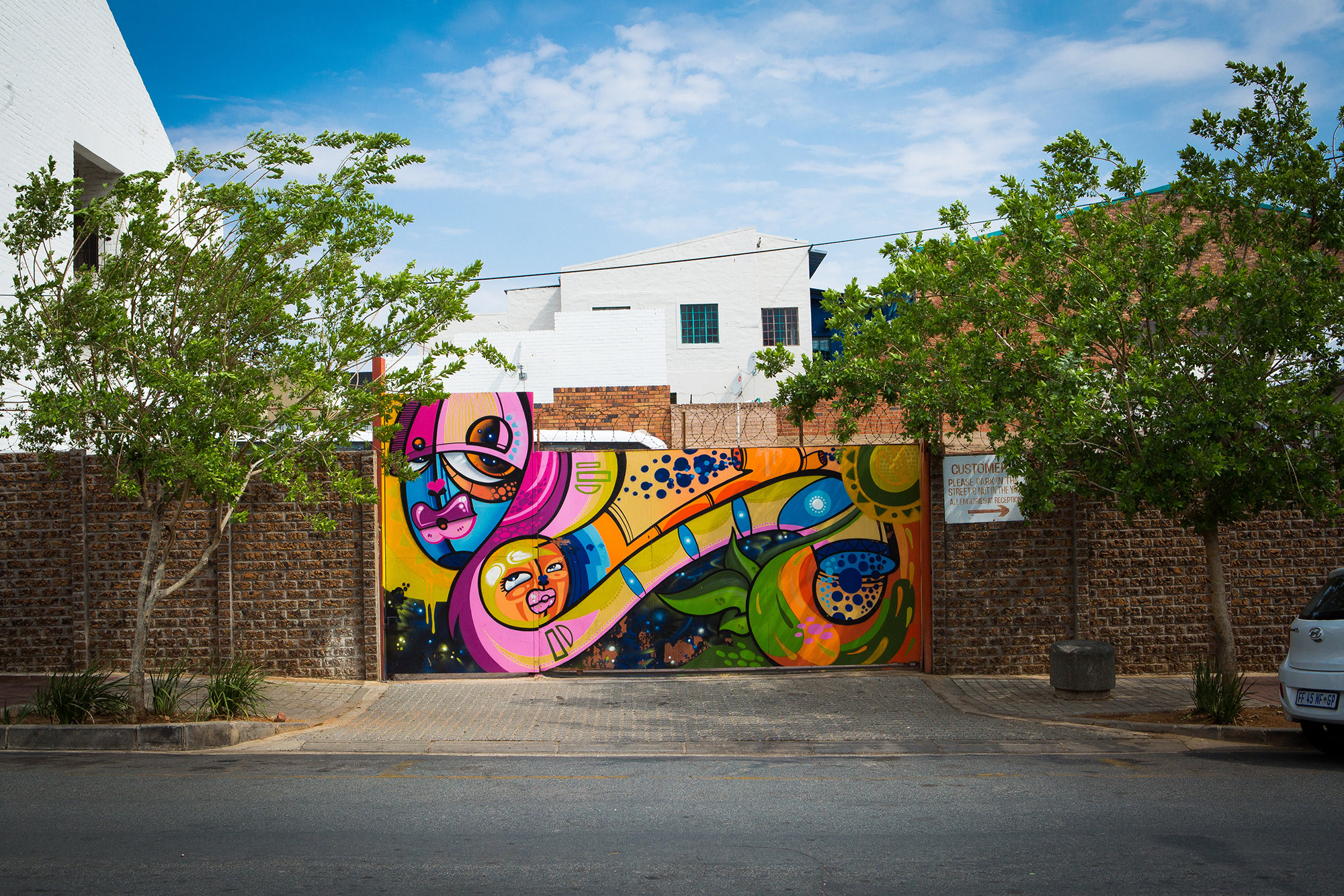 We loved this area and had a dilemma on where to do our shoot.  Before arriving in Joburg we were set on shooting in Soweto because we felt it would fit the concept for our shoot.  After visiting some of the other areas in Joburg we were torn on what to use… which side of Johanessburg should we show – the newer/more modern Johannesburg or Soweto which was full of culture, texture, history.  This was such a dilemma for us so we decided to sleep on it a bit more before making our final decisions.

Unfortunately the day before the shoot mother nature had other plans for me because I got SICK with a cold.  We got to experience our first pharmacy trip in South Africa while there which was interesting.  Nothing was over the counter so Reg had to tell the pharmacist my symptoms and they recommended which types of meds to take.  We ended up with a few things we knew and a few we didn’t know but I was willing to take anything at this point.  On top of this it was time to start our malaria meds for our upcoming Ghana trip.  On the day of our shoot I mistakenly decided to take the meds before having a meal and started to get extremely sick walking to the car.   Next thing you know I’m vomiting everywhere before my big shoot! Unfortunately I had no choice but to keep it moving (photogs don’t get sick days you know) so I had to suck it up, put on a smile and hammer through the shoot.

So you’re probably wondering which location we decided on.  We decided on both!  For our main shoot with the kids, we decided to stick with our original location of Soweto.  Later we did a lovely mother/daughter shoot with Bolthale and her daughter to show the more modern side of Joburg which worked out perfectly.  Here are a few behind the scenes captures of us at our shoot in Soweto. 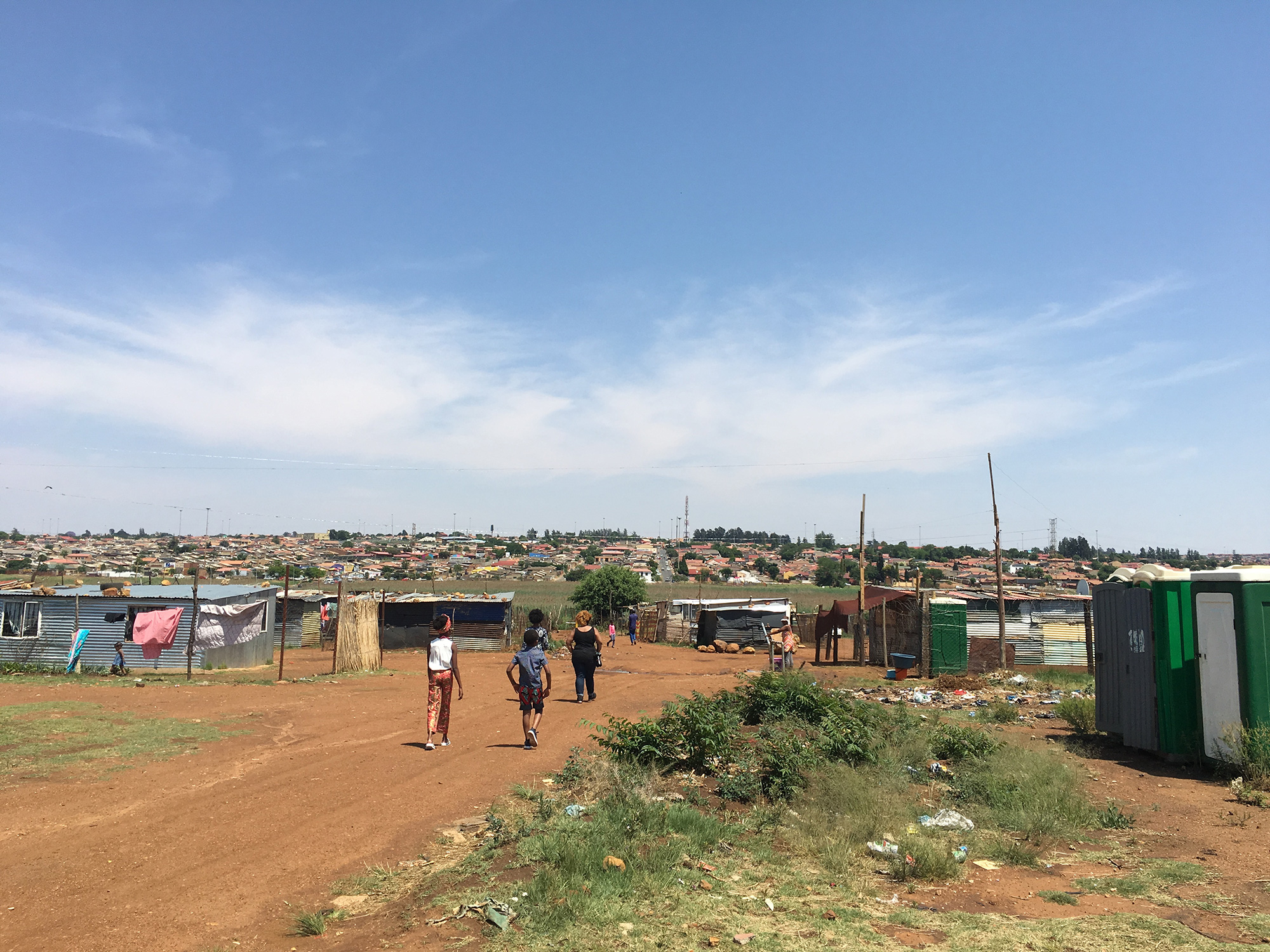 Also I thought it was important to share a pull back shot side by side with the actual shot for this shoot. I think one of our gifts as photographers is the ability to be able to find the beauty in people and places that other people simply cannot see.  What may seem like a dilapidated old building to you may be a spot with perfect lighting and backdrop for us.  Perfect example below.  I loved the fact that we were able to make beautiful  photographs in some of the most unlikely places.  So many of these places had beautiful people and cultures so it would have been a mistake to skip these places simply because they didn’t show off the more modern parts of town. 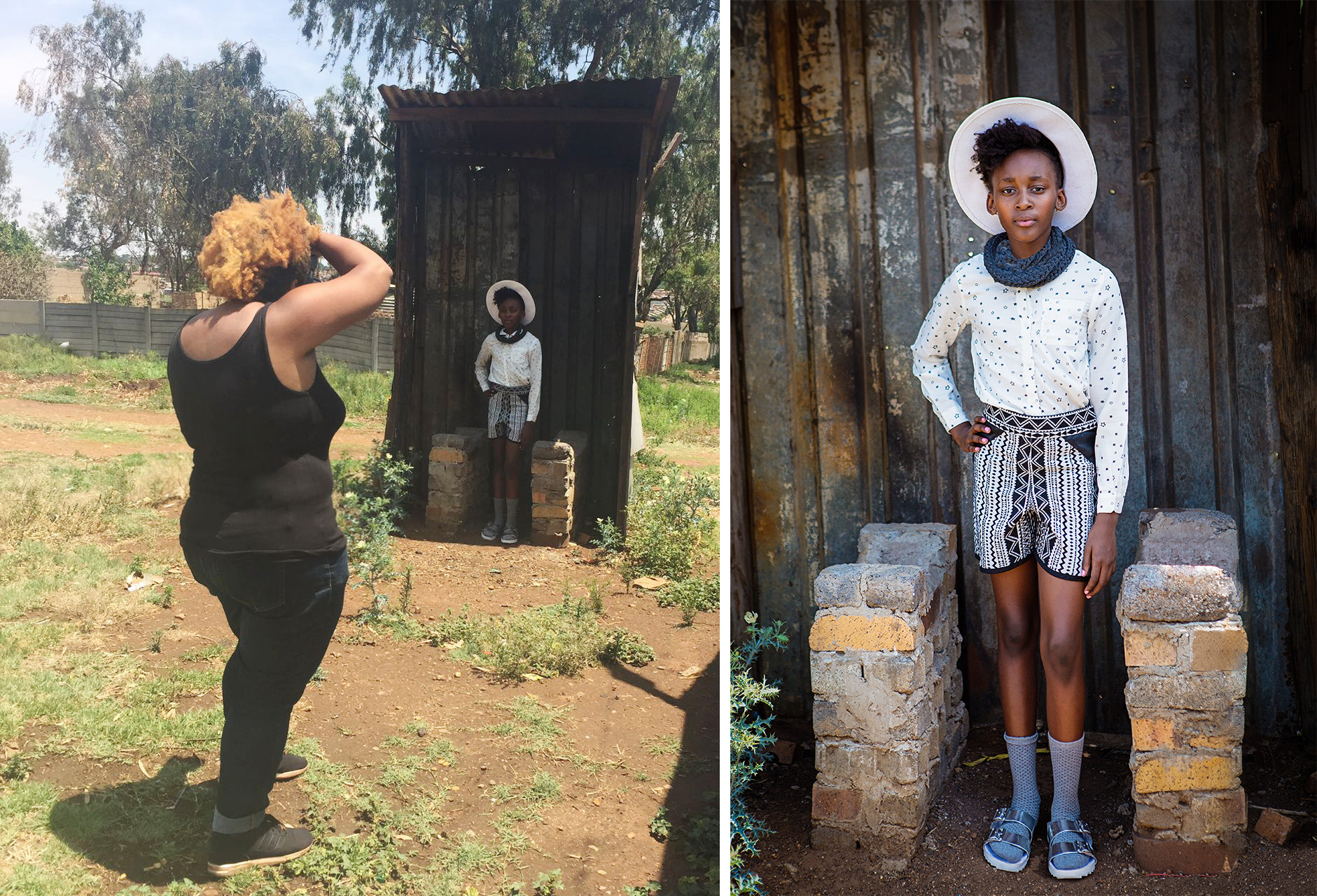 The shots below may be some of my favorites. One of the things i love to see when working with kids is to see how their confidence grows during a shoot.  That confident stride seen below is why we do what we do. 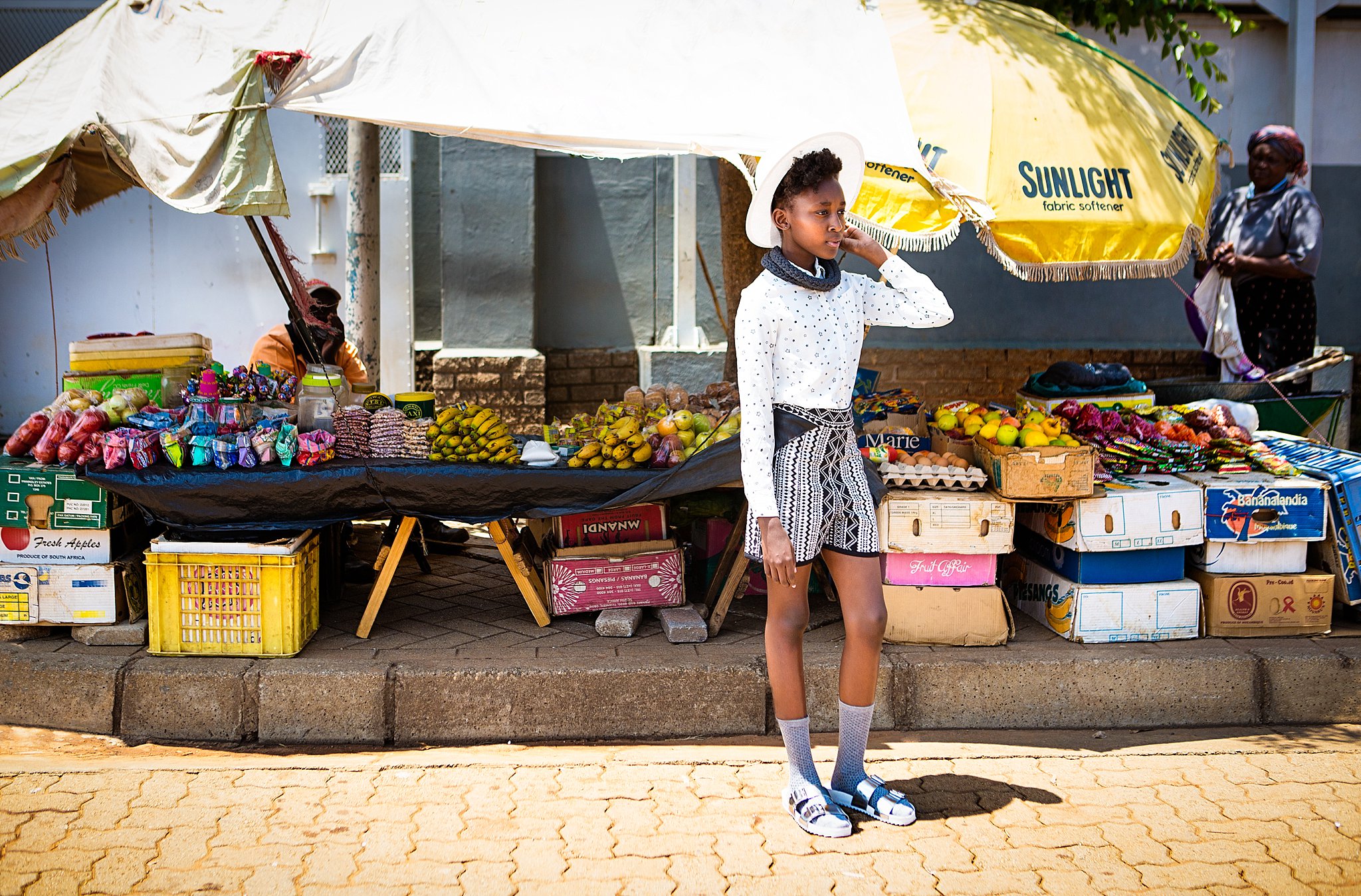 We were also thrilled to incorporate local vendors into our shoot to highlight some of the thriving small businesses in each location. We fell in love with some of the pieces from the NaturalOne clothing company and decided to mix it in with a few modern pieces.  We also incorporate a few of our favorite pieces from US based designer Alexandria Olivia’s new tribal collection. 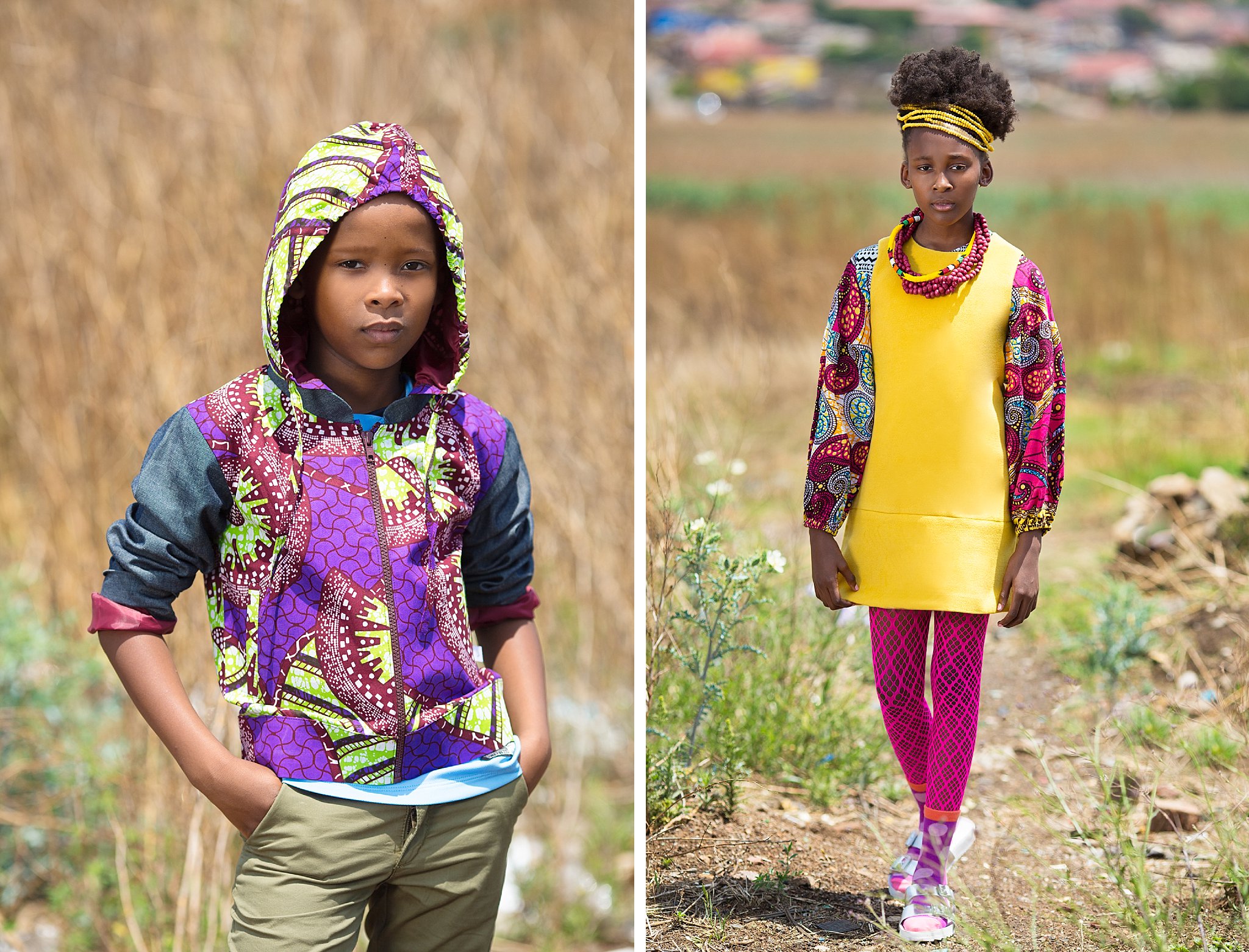 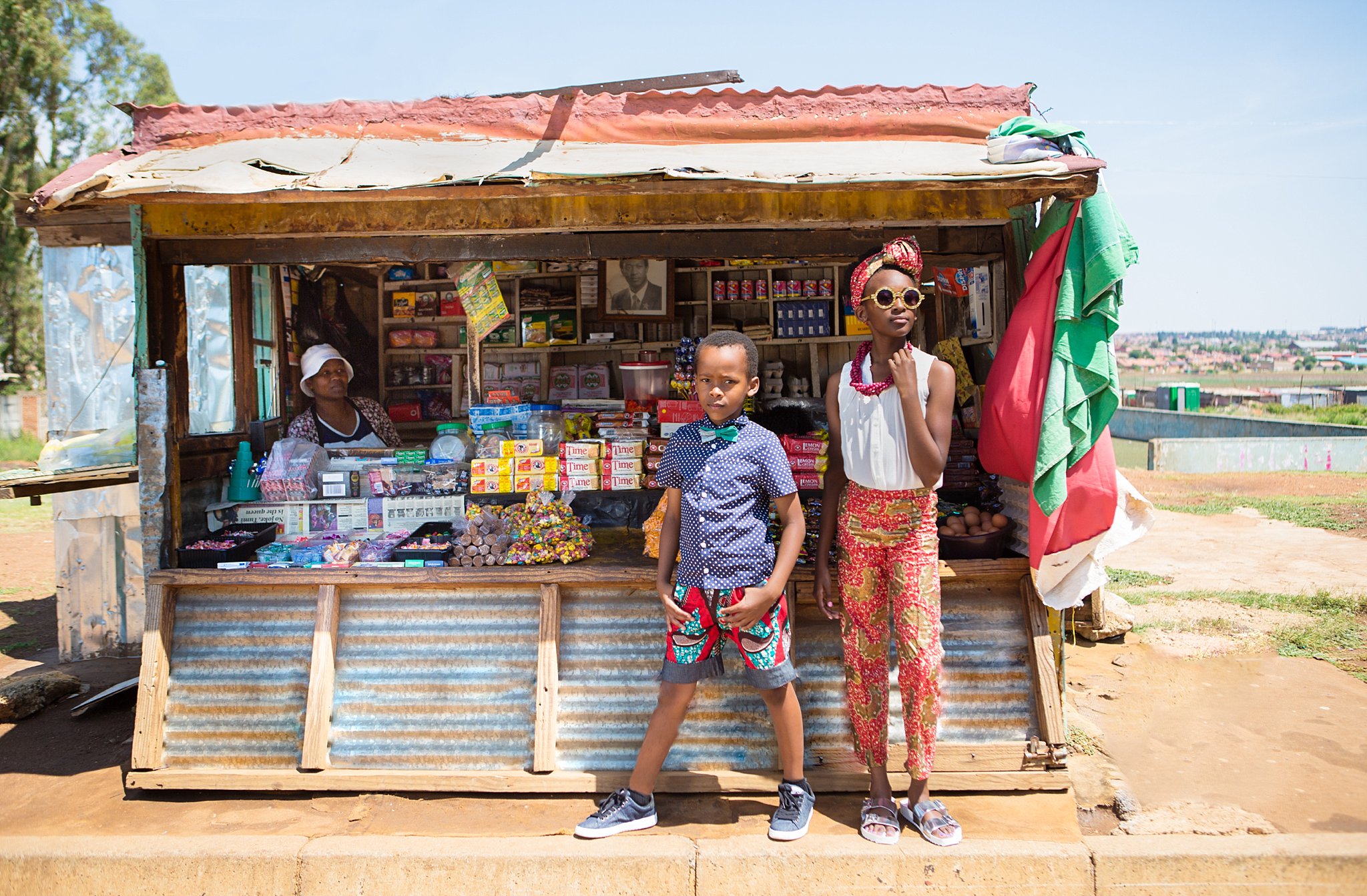 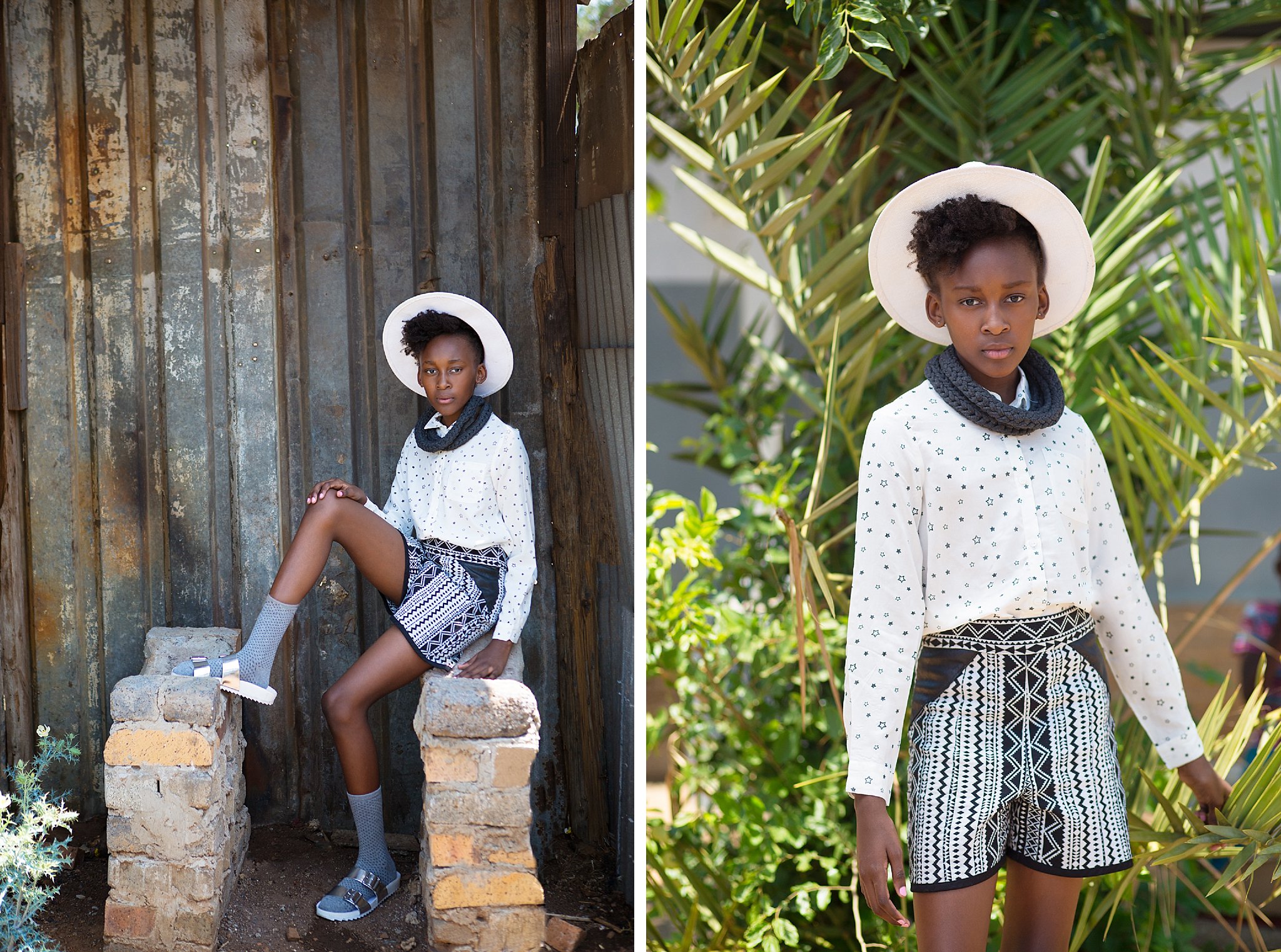 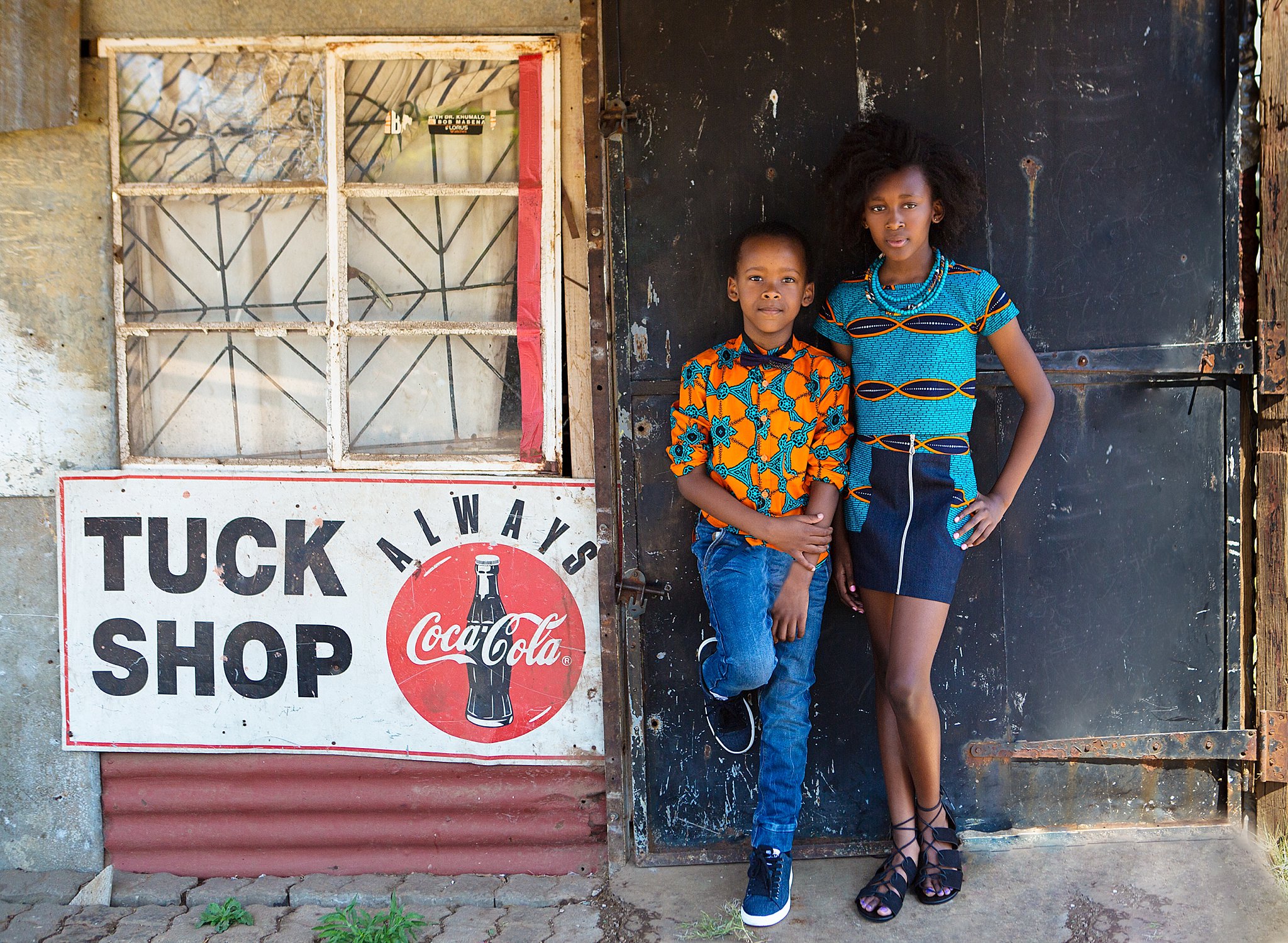 And here are some of our mother/daughter shots from the town of Maboneng.  Love these! 🙂 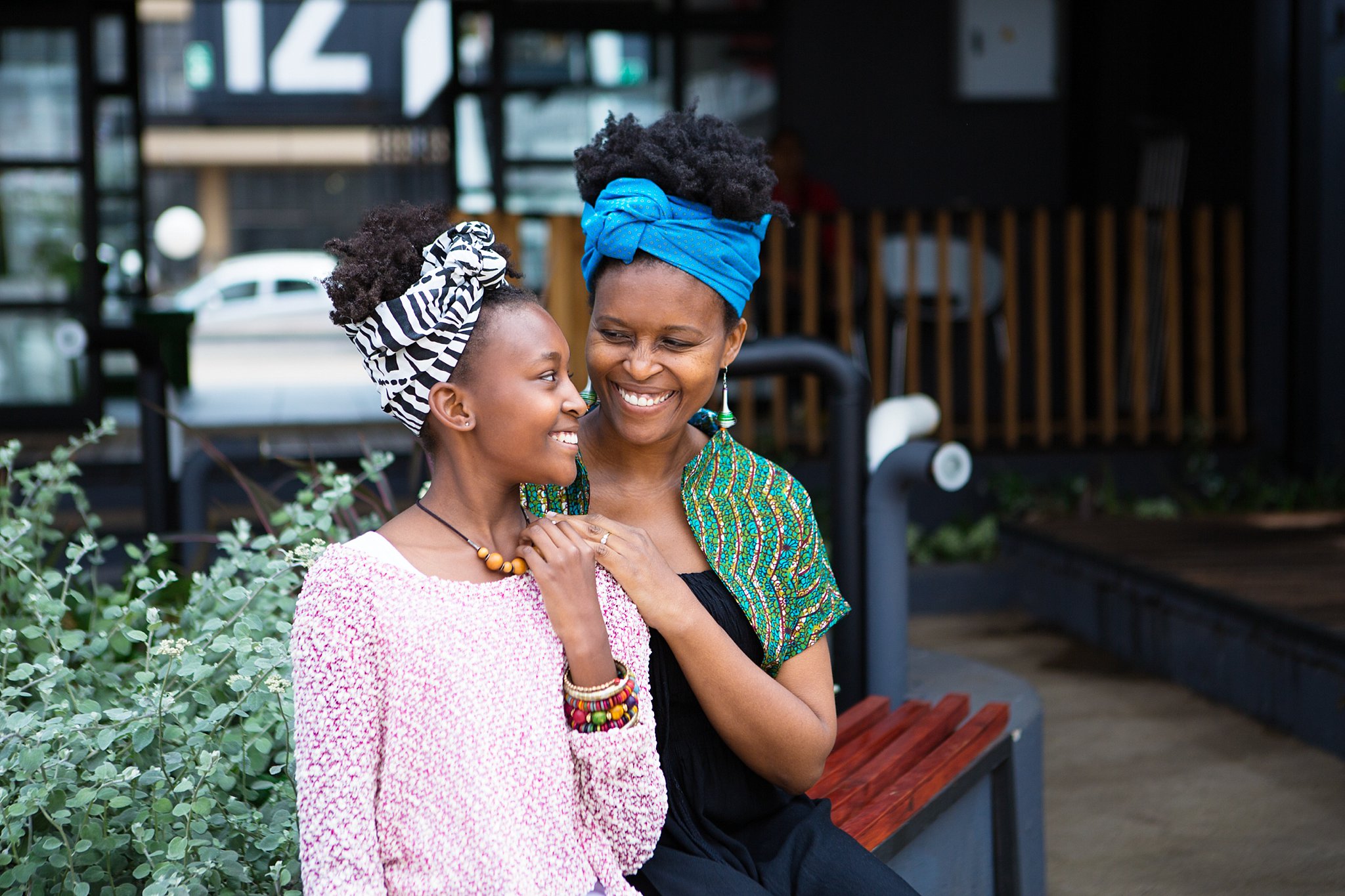 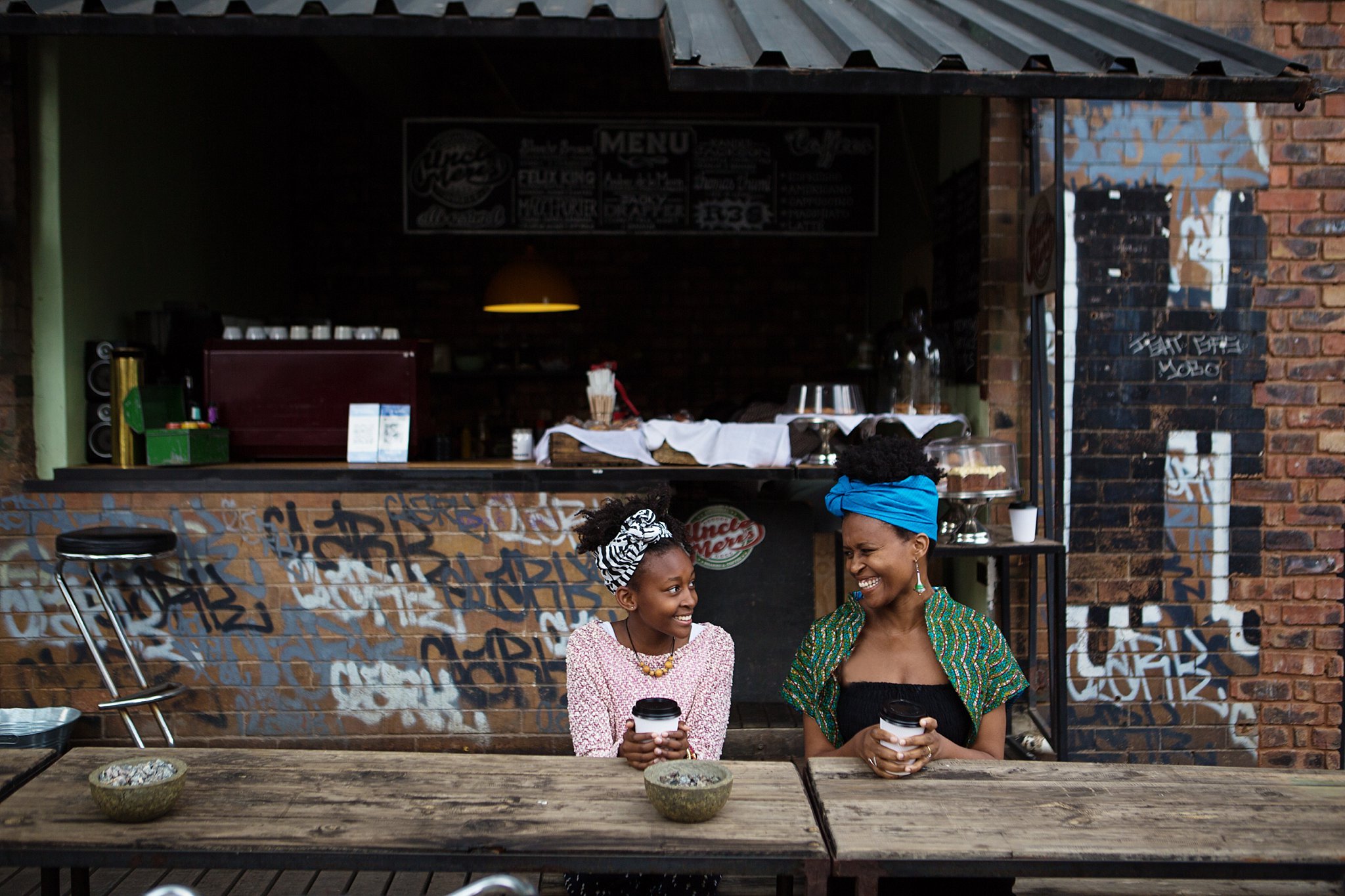 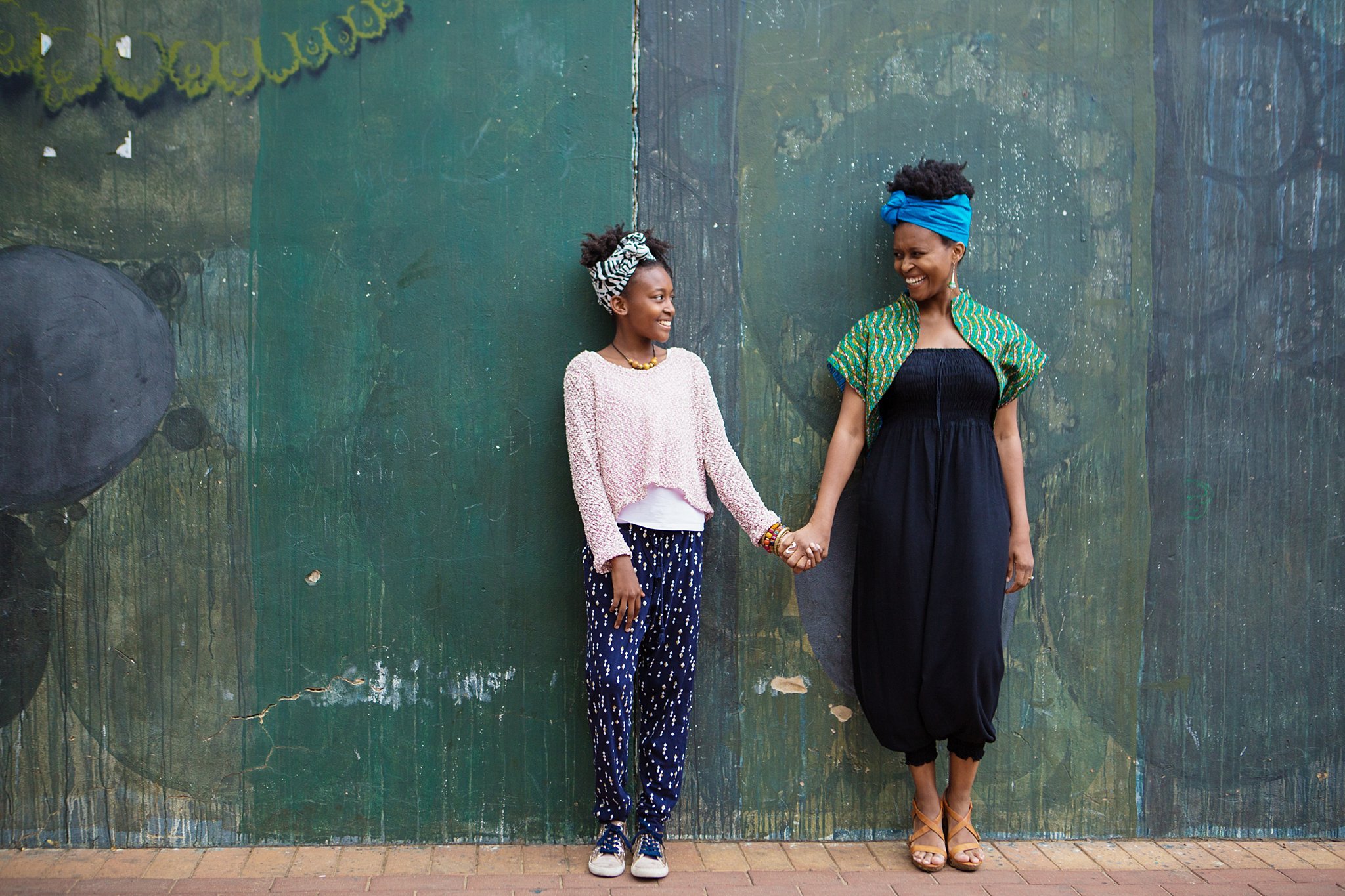 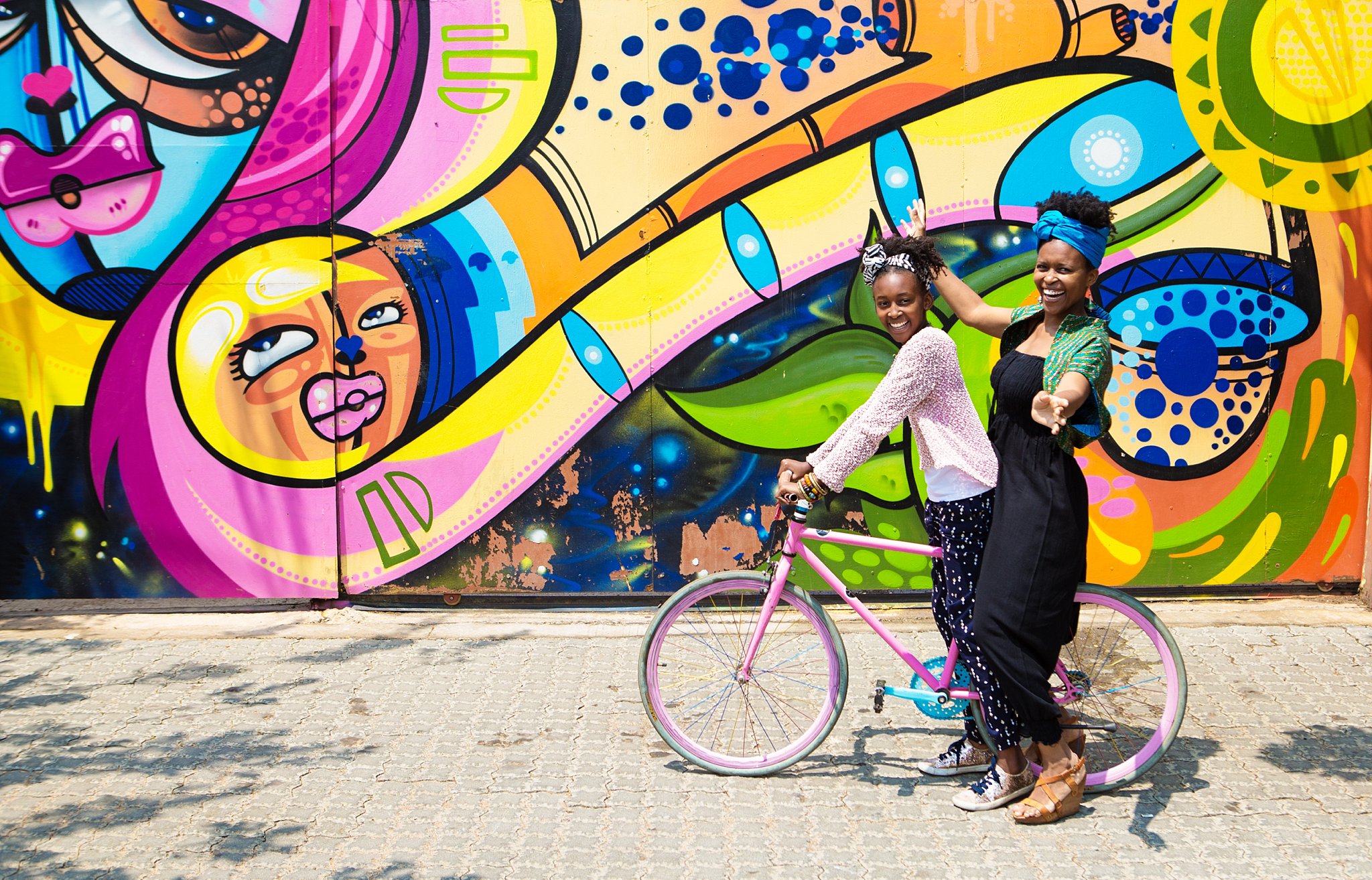 Overall we enjoyed our time in Johannesburg and the lovely people we met while there.  Our overall impression was that there was definitely two sides of Joburg and it would be a mistake to not experience both while there.  We would love to go back and visit more areas and possibly Cape Town the next time we’re in town.